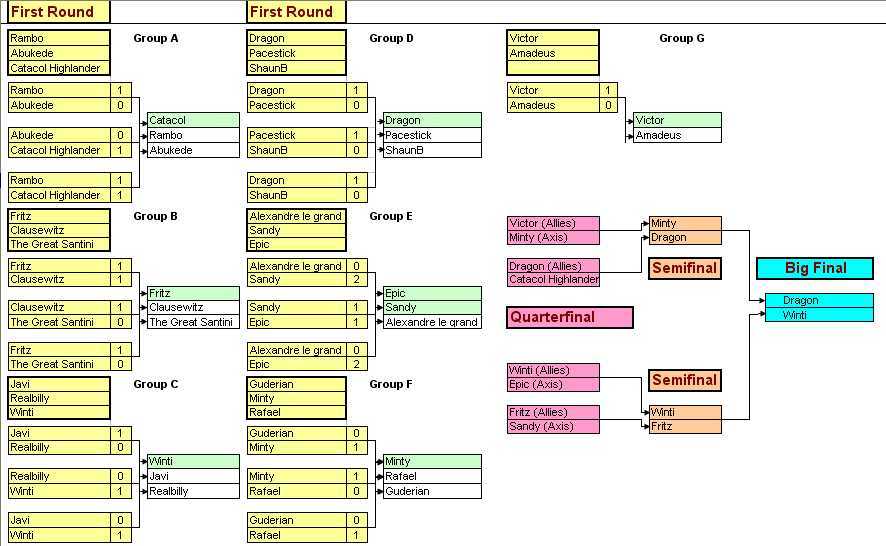 1) Strategic Command WWII Global Conflict Patch v1.04 is recommended, please update!
2) “World at war” is the Default Campaign to play. Only 1 single PBEM game is required. Other campaigns, TCP/IP and mirror games are possible.
3) Every game has to be finished in 90 days. Group phase from 2010-12-01 till 2011-02-28
4) “Minor victory conditions” If any game isn’t finished in 90 days the games minor victory conditions decides the match
Axis minor victory conditions are (after 90 days in tournament)
Berlin, Rome, Paris, Tokyo, Seoul, Manila
Allies minor victory conditions (after 90 days in tournament)
Paris, London, Moscow, Washington, Chungking, Delhi, Manila, Canberra
Other conditions are tied games! REMARK: Because of “Fair play” in this case it is needed to play at least 120 turns in these 90 days. If not arbitrator will choose player for next round. Maybe turn files has to be checked. After playing the group phase this rule has to be reconsidered.
5) “Changing side rule” Every player has to play Axis AND Allies. After playing one side next match should be played with other side. Other agreement with opponent is possible.
Example: Player 1 played Axis and wanna play Axis in next group match too. He could try to arrange his request to his opponent. This is possible by arrangement!! If his opponent (Player 2) played Allies in first match and he wanna play Axis now Player 1 must change his side.
Example: Player 1 and Player 2 both played Axis in first match and wanna stay playing Axis in next match against each other. Now alphabetical order is taken and gives the Player “Alpha” the final decision against Player “Betha” for this match. But if “Alpha” played Axis 2 times he fall behind against any player who played 1 each or 2 times Allies in any upcoming match.
6) “Group phase” Every group has 3 players. 2 games are needed to play each other. Group phase lasts from 2010-12-01 till 2011-02-28. How many players will reach the KO rounds (1 or 2 players of each group) depends on how many players sign in till 2010-11-30
Zuletzt geändert von Amadeus am Di 31. Mai 2011, 07:25, insgesamt 17-mal geändert.
“Die Größe eines Menschen zeigt sich nicht an seinem Reichtum, sondern an seiner Integrität und seiner Fähigkeit, seine Umwelt positiv zu beeinflussen.“ - Bob Marley
Nach oben

I am happy to play.

I will be happy to play too.
Please keep me informed
Nach oben

Me too, me too

Count me in, drop me a line when everything is ready to go.

Because it is an English game and mostly played by guys from overseas I made a Thread on Battlefront.com

I will update both sites but only write in English, sorry.

I'm in too, Dragon

Dragon is in? You are playing the last Tournament too!!?

OK anyway, I bet a final RAMBO vs. DRAGON

Only the victory conditions are a small issue to handle with.

New idea, maybe we could agree on the basis of the default minor victory conditions:

I am interested in playing in the tournament.
Nach oben

You are welcome Santini.

Important News to all players!!!

£ 20 voucher for the second place to be spent on WW2 goodies here:
http://www.epicmilitaria.com/product...-officer-visor

Last signing in for the Tournament is next Tuesday but we already have the first result:

Last day for signing in is over. We have 20 players for the Tournament.

I think it is the best when playing best of 8 after the group phase. So only the winners of each group is savely for next round. I will contact each group after a while to make sure that everything is allright.

Group A: Abukede surrender to the other guys of the group, maybe he has not enough time.

Group B: Fastest victory of the tournament thru Clausewitz. Mirror game between Clausewitz and Fritz not that far at the moment.

Group C: Looks like a small advantage on Winti but all games still in progress

Group D: Only little information from Australia that everything works fine

Group E: All games are mirrored games, so there are 4 games in progress. Alexandre le grand/Sandy have now reached Oct/Nov 1943. Sandy/Epic are up to May/June 1943. The Axis is doing well in all 4 games – China conquered and India invaded in all 4. The early war in Europe went fairly conventionally in all 4 games, with Barbarossa starting around the usual mid 41 date and Japan everywhere attacking the Soviet Far East.

Seems to be close in all games.

Group F: Guderian/Rafael are currently in february 41. Small problems in Guderian/Minty due to the airport chaos in Europe. His laptop with his luggage are lost and it will take a while to resume the game.

Result in Group C: With Allies Winty achieved Major victory against RealBilly on 15th of August 1943.

After Winti beats Realbilly he beats Javi too. So he is in the Play Offs for sure.

First couple in the play offs is:

Important note for all players in the play offs: Victor has to take Axis (If Minty wants him to) cause he only played one game as Allies in Group G. Minty, Dragon, Winti and Fritz as quickest players in Group phase gets the first option to choose side. BUT if they take Allies in a single match they must take Axis when reaching Semifinal.

To all Players of the Tournament

we just finish the Group Phase. Some games are not completely finished but we have the 8 players for the Play Offs. You could start whenever you want.

Rules for the Play Offs:

1) Strategic Command WWII Global Conflict patch v1.04 is recommended, please update!
2) “World at war” is the Default Campaign to play. Only 1 single PBEM game is required for Quarter and Semi Final. Other campaigns, TCP/IP and mirror games are possible. Check all sets or options soon.
3) Every game has to be finished in 90 days. Quarter Final leads from 2011-03-01 till 2011-05-31
4) “Minor victory conditions” If any game isn’t finished in 90 days the games minor victory conditions decides the match
Axis minor victory conditions are (after 90 days in tournament)
Berlin, Rome, Paris, Tokyo, Seoul, Manila
Allies minor victory conditions (after 90 days in tournament)
Paris, London, Moscow, Washington, Chungking, Delhi, Manila, Canberra
Other conditions are tied games! REMARK: Because of “Fair play” in this case it is needed to play at least 120 turns in these 90 days. If games ends as a draw arbitrator will choose player for next round. Maybe turn files has to be checked.
5) “Changing side rule” is still active. Minty, Dragon, Winti and Fritz may choose first for Quarter Final. After playing one side next match should be played with other side. Other agreement with opponent is possible. REMARK: The BIG FINAL will be played as a Mirror Game!
6) Quarter Final will be played as follows:

Victor vs. Minty
Catacol Highlander vs. Dragon
Epic vs. Winti
Sandy vs. Fritz

Note: For the first 5 players I take the quicker players in Group Phase and I take alphabetical order for the last 3 players (Catacol, Epic, Sandy).

Sandy opens his match against Fritz. He plays Axis, Fritz is fine with Allies.

Last day of scheduled Quarter. We shortly wanna enter the next round of the Big Tournament. Please report what you have now.

The currently best player from our Panzerliga just go into the Semifinal.

Just in time all players reported their games to me. First of all I wanna congratulate the final 4 SC Players. And again thanks to all for making this organization so easy. There were some very close matches but really all played fair. Schedules are never be a problem.

OK, now you have to concentrate to your next duty to reach into the Big Final! The matches has to be finished on Friday, September the 30th. I additional month more because of summer time. Matches are:

You could change sides or play mirror if you want. The Big Final has to be played in mirror as a must.

Again I wanna campaign for an AAR of your games because only a well known tourny is interesting for everyone. "Be good and talk about it". I will contact you after a while to get some information for the crowd.

Which countries are belligerent?
Which major cities are conquered?
Did important battles take place?

Any questions? Give it to me.

Let me introduce the Semi Finalists to you:

First of all, Minty. Minty is a manager from the UK and 35 years old. He beats Victor in the Quarter very badly by an unknown tactic. Maybe we catch this information later in the tourney.

Opponent for Minty is Dragon. Dragon is from our German Fan site Panzerliga. He works as an Administrator for IBM in Frankfurt, Germany. He likes turn based strategy games and is 45 years old. He was always on top in our Panzerliga ladder system.

Second couple begins with Winti. Winti is from Hungary and works in IT area too. He is only 36 and the youngest player in the Semi. Winti started with chess and changes to computer games a bit later. Class of steel and Master of Orion 2 were favourite titles of him.

Last but not least there is the oldest

player in the Semi Final. Fritz is from California, USA and 48 years old. He loved all the Avalon Hill games as a kid. Maybe someone remember, in 1953, when a young gentleman from Baltimore named Charles S. Roberts, developed a game called "Tactics." Later in 1963 some more titles like Tactics II, Gettysburg, D-Day, Civil War, Waterloo, Bismarck and Stalingrad were published. Great games and the beginning of war games…

Winti opens an AAR of the second Semi Final Match on battlefront for insterested readers.

The big Strategic Command Global Conflict Tournament ist over! The Winner and best playing guy is Dragon. He earns the 80 $ prize money and is now an unofficial World Champion!!